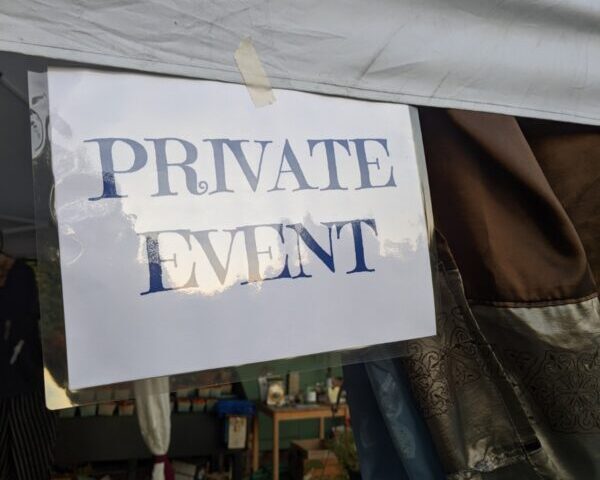 I host private suppers and each month is a different theme. Here they are, read below!

Hark back to the 1920s, when prohibition was strong and the speakeasies abundant. Wisps, fairies, and other such sprites had a rip-roaring time, too, during that decade. Bite into a 20’s classic hot brown sandwich, a Caesar that saved a chef’s bacon, then wash it down with some prohibition-style mocktails. Give the charleston a try as you dance the night away.

During this time of year, Cupid has the hardest time match-making. He doesn’t know what to do! Help the poor little cherub succeed by slinging and flinging the arrows of love at the correct targets, drink a love potion of sorts, and eat a delightful 3-course supper that will make you fall in love.

St. Patty’s day is a rough day for the locals. Patty Man McDonnell runs a muck, causing all kinds of problems while pinching people without green and drinking so much Guinness it makes the Irish blush. Track down this hooligan and help the locals enjoy this St. Patty’s day without added on mischief. On this supper, menu are Guinness braised corn beef sandwiches, some green-themed tasty bites, and Barmbrack bread pudding. Drink a green mocktail and slurp on some Irish blend tea!

During the rainiest month of the year, many wisps and sprites roll out to participate in the April Shower Rabbit Race! Dress up as your favorite rabbit. Find the best jockey wisp or sprite, then join a relaxing race to win a prize. Enjoy a tasty supper meal that’ll make a rainy day feel amazing! Join us and hedge your bets in the betting pool (we use fake money). Now bet on each other!

MAY – A Mad Tea Party

Join the madness at the best tea table in town where the clocks are stuck at 6 o’clock, the tea is fresh, and Alice joins in without an invite. Nibble on a three-course English-style tea meal with Treacle cups, Tarts that Jack stole, and scones with a clock face that tells the month and day but not the time! Dress up as your favorite Alice in Wonderland Character and be ready to move one space on.

Join Alice and try to play the oddest croquet game in town! You’ll be among stiff flamingos, lazy hedgehogs, and your friends. Help the cards paint the roses red, avoid the Queen of Heart’s wrath while eating a tasty supper, sipping on refreshing Alice Palmers. Each croquet game can handle about six people at a time. Dress up as your favorite playing card and see if you can make sense of Wonderland croquet.

Puck is hosting a Midsummer Fairy Feast. Upon arrival, they will warmly greet you. Once all is settled, follow the fairies in a dance around the fairy ring, find some pixy dust, then head over to the pixy toss. Delight in Fae theme foods and tasty nectars the great fairy queen would be proud of. Dress up as your favorite fairy or sprite and join in the festivities of the merry wanderer of the night!

This meal is set in the toasty backdrop of The Fiery Bog. It is up to you and your friends to save a little girl from a fate most melty! If someone stays in the bog for too long, they begin to suffer from meltitosis (melting). You must find all the treasure to buy the girl’s freedom from the infamous Octo the Octopus, the BOG KING. While searching for the treasure fuel up on bog poppers, fiery stew, and mud pies. Cool off with a Faux du Sazerac or other refreshing options. Just don’t get burned along the way!

SEPTEMBER – Supper with the Creatures

Come one, come all! See these famous creatures that have a taste for human fingers! To keep yours (everyone gets a finger necklace upon arrival), draw the best portrait you can to appease these wild and strange critters. If they disapprove, you lose a finger from your necklace! While trying to appease the creatures, delight in a finger food menu with fingerlings, lady fingers, and more!

Travel across the vale into the Otherworld. This is the time of year when the valleys between grow thin and the living world merges with the spirit one. Dress up as your favorite ghoul, ghost, or goblin to blend in with the Otherworldians otherwise, be marked for the rest of the evening. This could attach some attention from some wandering wisps.

*There are no themes for November or December because Whimsy Supper Club’s owner takes the holidays off to be with family and friends and recover from doing the markets. These are deemed the recharge months!

Excuse the messiness! Site is being worked upon for improvements :-D Dismiss